A Look at 1984: Piroulines U.S. Arrival and Pursuing the American Dream In 1984, Peter DeBeukelaer founded his bakery, DeBeukelaer Corporation, in the small town of Madison, Mississippi with the mission to share the American dream with as many people as possible via the rolled wafers his family started baking in Belgium in 1860.

2019 is an exciting year for Pirouline because it is the 35th anniversary of the one and only magical cookie with a swirl! While a lot in the world has changed in 35 years, the Pirouline recipe and standards have remained the same – even dating back to the process of the DeBeukelaer forefathers in the 1800s!

We are going to be celebrating our rolled wafer’s birthday all year long, starting with a trip back to 1984 to see how much things have changed since our delicious wafers started rolling out of the bakery and into the hands of those with a sweet tooth!

The American Dream and American Pride

Secondly – it is no wonder Peter DeBeukelaer decided to move his family from Belgium to the United States in the mid-80s, as it was an exciting time for the American dream to flourish with so many patriotic events. 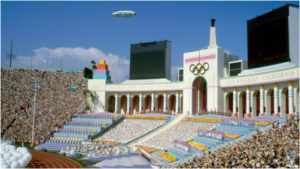 In 1984, Los Angeles hosted the Olympic Games where tickets sold for just $17. In other sports news, two-time gold medalist Olympic legend himself, Michael Jordan was selected in the first round of the NBA draft for the Chicago Bulls. While we are remembering basketball in 1984, it’s also notable that this year LeBron James was born!

Back in Madison, Mississippi, Peter and his wife Mireille were making their first hires in the bakery, teaching others how to make his family’s beloved rolled wafers, communicating the standard of excellence expected with each cookie, and instilling the American dream into each employee and new member of the Pirouline family. And in doing so, they honored the past, taking the legacy of Peter’s forefathers, and transforming it into a promise for tomorrow and a commitment to the team who will get us there.

It is simply the story of ordinary people coming together to build a better, richer, fuller life for themselves, and then inviting the next generation of dreamers to join them and share in that future.

Where were you in 1984? Or where was your family? Share your stories with us on social media using #shareaswirl.